Meet the people who tend to our Tenderstem® broccoli as they explain what makes our mini trees so darn delicious. 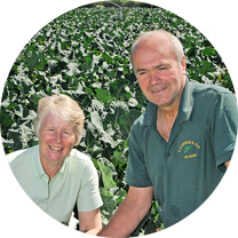 “It’s not for everyone,” Caroline says. “Tenderstem® broccoli needs a lot of nurturing in the planting but also in the harvesting—you have to do it by hand. We pick it every three days or so. A day over and it’s passed its ultimate tenderness, or worse, sprouted into a yellow flower.”

They have previously used their innovative and secret methods to win the accolade of delivering the first English Tenderstem® broccoli to supermarket shelves. 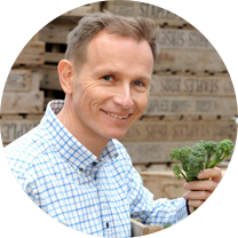 George Read and his brother Vernon are totally passionate about producing the best quality crops at Staples Vegetables, growing a range of crops from cauliflower to courgettes, peas to potatoes – and one of George’s favourites, Tenderstem® broccoli.

They were first encouraged to try growing Tenderstem® broccoli by their customer Marks & Spencer and they’ve since had to increase their acreage to keep up with demand. George says, “There’s a demand for Tenderstem® broccoli because it’s got a better all-round flavour than traditional broccoli, beating it hands down in sweetness, which makes it a favourite among kids. And its convenience is important too. You can just take it out of the packet with no need to chop and you have a seriously healthy convenience food.” 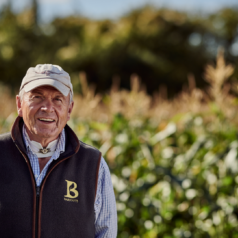 Barfoots is a family-run farm which has grown into an award-winning, global farming and food business that shares the same values as Tenderstem® with green credentials to match.

The farm’s success, under the stewardship of fifth-generation farmer and vegetable visionary Peter Barfoot CBE, stems from an uncompromising focus on quality, innovation and sustainability. Barfoots has been growing Tenderstem® in West Sussex and Hampshire since 2010 and now grows around 2,000 tonnes a year in the UK. Barfoots employs hundreds of people in its team during the UK growing season to ensure it can supply a consistent, reliable high-quality crop to major UK retailers and recipe box providers.

Barfoots’ coastal location has its own microclimate which is perfect for growing Tenderstem®. Planting starts early in March and finishes in early August. The milder climate ensures a slightly longer growing season, with hand harvesting starting towards the end of May and finishing in mid-November, weather (and sufficient labour) permitting.

Barfoots now grows, processes and packs a range of semi-exotic vegetables but its local roots and central philosophy to “look after the land like you are going to farm forever” have stood the farm in good stead as the business has grown. These core principles underline Barfoots’ integrity and align closely with the Tenderstem® brand values.

And Barfoots’ preferred way to enjoy Tenderstem®? “Keep it simple so the Tenderstem® is the hero…steamed, drizzled in a bit of olive oil, a squeeze of lemon and a grind of black pepper and sea salt…delicious.”

How Tenderstem® broccoli is grown

In this video Matt Gedney, talks about the labour of love it is to grow and harvest Tenderstem® broccoli, and food writer and stylist, Genevieve Taylor, demonstrates its incredible versatility in the kitchen.

Here are our latest and greatest Tenderstem® broccoli recipes that we love right now. And, we think you’ll love them too.